Summer Lovin': Celebrities About to Walk Down the Aisle

At Vanna K, we obviously love engagements and weddings. And celebrities do both in big ways. While celebrities don't usually publicize their exact wedding dates, we have a good idea of the most anticipated upcoming Summer / Fall weddings for 2013. We also have a look at their engagement rings and how you can get a similar look right here at Vanna K. 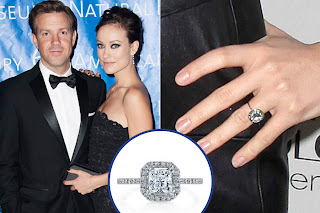 Olivia Wilde & Jason Sudeikis: The SNL funny man proposed to the striking actress in early January. When asked about the wedding planning in February, Wilde admitted that she was a little overwhelmed by the planning and hadn't yet tackled it with her busy schedule. Hopefully by now, they've found a great wedding planner that can get them down the aisle later this year. Wilde's engagement ring design is straightforward sparkle. With a thin band and a large center stone, surrounded by round diamonds. Find a similar style with this ring (in the circle) from our Solea Collection; Style # 18RM61134DCZ 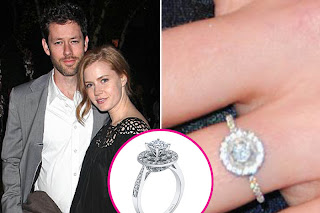 Amy Adams & Le Gallo: Unlike many quickie Hollywood romances, this one has taken it's time and a beautiful journey to the alter. The multi-talented actress has been with her longtime boyfriend since 2002. She met the fellow actor in an acting class way back in 2001 and they began dating after a year of friendship. We can't wait to see these two make it official later this year! Amy's ring is a beautiful round cut. The center stone seems to be floating in the middle. The thin band is intricately lined with diamonds. Find a similar style with this ring from our Solea Collection; Style # 18RM39218DCZ 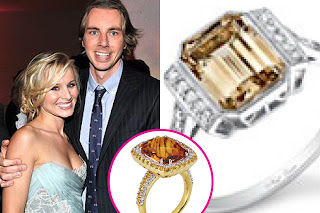 Kristen Bell & Dax Shepard: These two adorable actors have been together for several years now and engaged since 2009. They made a couple movies together, but their biggest project was their baby, whom arrived just this past March. Now that they have had a few months to master "Parenthood", we look forward to them finally walking down the aisle. Kristen's ring is beautiful and unique with a pop of color. At Vanna K, we love color and encourage the use of it in non-traditional engagement rings. You can find your own pops of color in our Gelato Fashion Collection. This featured ring is Style # 18RO700D 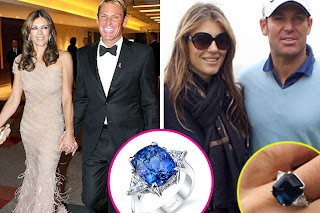 Elizabeth Hurley & Shane Warne: It's not her first walk down the aisle, but Elizabeth Hurley looks every bit as gorgeous as a young 20-something. The 46-year old English actress / model got engaged to her cricketer boyfriend back in 2011 and are expected to walk down the aisle sometime this year. Elizabeth has been donning a stunning engagement ring, featuring a brilliant sapphire center stone. We love this look and you can something similarly striking from our Kamara Collection of unique engagement rings. Here, we featured one of our award-winning tanzanite dazzlers: Style # 18RGL22TD 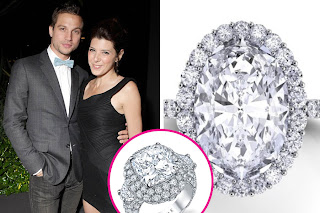 Marisa Tomei & Logan Marshall Green: You may find this surprising, but this is the first walk down the aisle for the stunning actress, Marisa Tomei. She's been a dream girl for many since she captured hearts in "My Cousin Vinny" and she's barely aged a day since then. We can't wait to see her wedding style when she takes the plunge later this year. Marisa has managed to keep her personal life out of the tabloids during her career. Likewise, no one has quite captured a good shot of her engagement ring. The ring on the right is the rumored ring. While we think Marisa could probably pull of just about any style, we've featured a stunner from our Kamara Collection: Style # 18RGL00654DCZ

Congrats to all couples tying the knot in 2013, celebrity and otherwise! You can find your red-carpet-worthy, unique diamond engagement ring today at Vanna K!
Posted by Vanna K Blog at 8:00 AM